The event synopsis – Hip-hop doesn’t enhance society, it degrades it. Hip-hop divides the intellectual establishment: is it the authentic voice of the oppressed, of all the “wretched of the earth”, one that turns anger into poetry and political action? Or is it a glorification of all that holds back the chances of oppressed minorities? The advocate for the motion was Eamon Courtenay, advocate against was Michael Eric Dyson who had the audience on his side from early on, mainly through a very compelling delivery. Eamon supported the view that the ‘black man’s image has been destroyed by Hip Hop’ while Michael argued that what we think and what is the case is very different. It was emphasized that this event would encourage open date and it delivered there. Krs-One made the point that with regards to enhancing or degrading society, that ‘they can’t give us powers we don’t have’. And surely in support of Benjamin Zephaniah’s view that it is in fact politicians who are degrading society, who could argue that the genre is not in fact poetry and a social media in itself?

Rev Jesse Jackson, Civil rights activist & baptist minister , was clear that hip hop exposes contradictions i’e Iraq war and conflict with dubious motives, while there was another argument that we are ‘too hung up’ on language. Surely lyrics should not be taken in a literal sense but as a metaphor and a reflection of a democratic society? do we want to be told what to listen to and when…? John Sutherland, Professor of Modern English Literature at University College London has the last say for now: “90% of everything is crass”. W 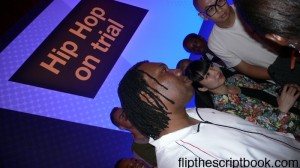 e really should focus on the 10% a little more. What do you think?