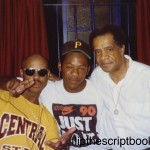 Flip the Script had the great honor to meet both Donald Byrd and Guru on the Jazzmatazz London Debut (29 November 2000).

The gifted trumpeter Donaldson Toussaint L’Ouverture Byrd II, (born December 9, 1932) was an American jazz and rhythm and blues trumpeter. A sideman for many other jazz musicians of his generation, Byrd is best known as one of the only bebop jazz musicians who successfully pioneered the funk and soul genres while simultaneously remaining a pop artist. He teamed up with the Mizell Brothers (producer-writers Larry and Fonce) for Black Byrd in 1972. It was highly successful and became Blue Note Records’ highest-ever selling album. The title track climbed to #19 on Billboard’s R&B chart and reached the Hot 100 pop chart, peaking at #88. The Mizell brothers’ follow-up albums for Byrd, Street Lady, Places and Spaces and Steppin’ Into Tomorrow were also big sellers,

In 1993 Guru released Jazzmatazz Vol. 1. Guru decided to take music to new heights by utilizing the brilliance of actual jazz musicians to produce the sounds to rhyme too. He merges his potent and forever meaningfull rhymes with beats and instruments directly from authentic lounge jazz. The album fuses an assortment of jazz talents both old and new, including Donald Byrd, Lonnie Liston, Roy Ayers, Courtney Pine, Branford Marsalis , and Ronny Jordan. He used the melodic voices of Carleen Anderson and N’Dea Davenport and collaborated with french rapper MC Solaar. The variety of guest artists adds diversity and originality to each track, and gives the album a distinct jazz feel. In its own right the album is a historical document of jazz and hip-hop starting to blend.

We pay tribute to both musicians and continue to celebrate their great legacy in music.