This year has been one we will look back on and remember for a long time. On May 31st London marched in solidarity with protestors in the US sparked by the murder of George Floyd. I had joined the protesters who began in Trafalgar Square before marching through Westminster to Downing Street. A second demonstration was also held outside the US embassy. While I was taking pictures I captured a shot of a striking woman leading the march on the bridge approaching the Houses of Parliament. At the time I had no idea how significant this moment would be. This was Imarn Ayton – Actor, Activist & Model. Here Imarn describes in her own words, what happened that day, and the moment in that picture. 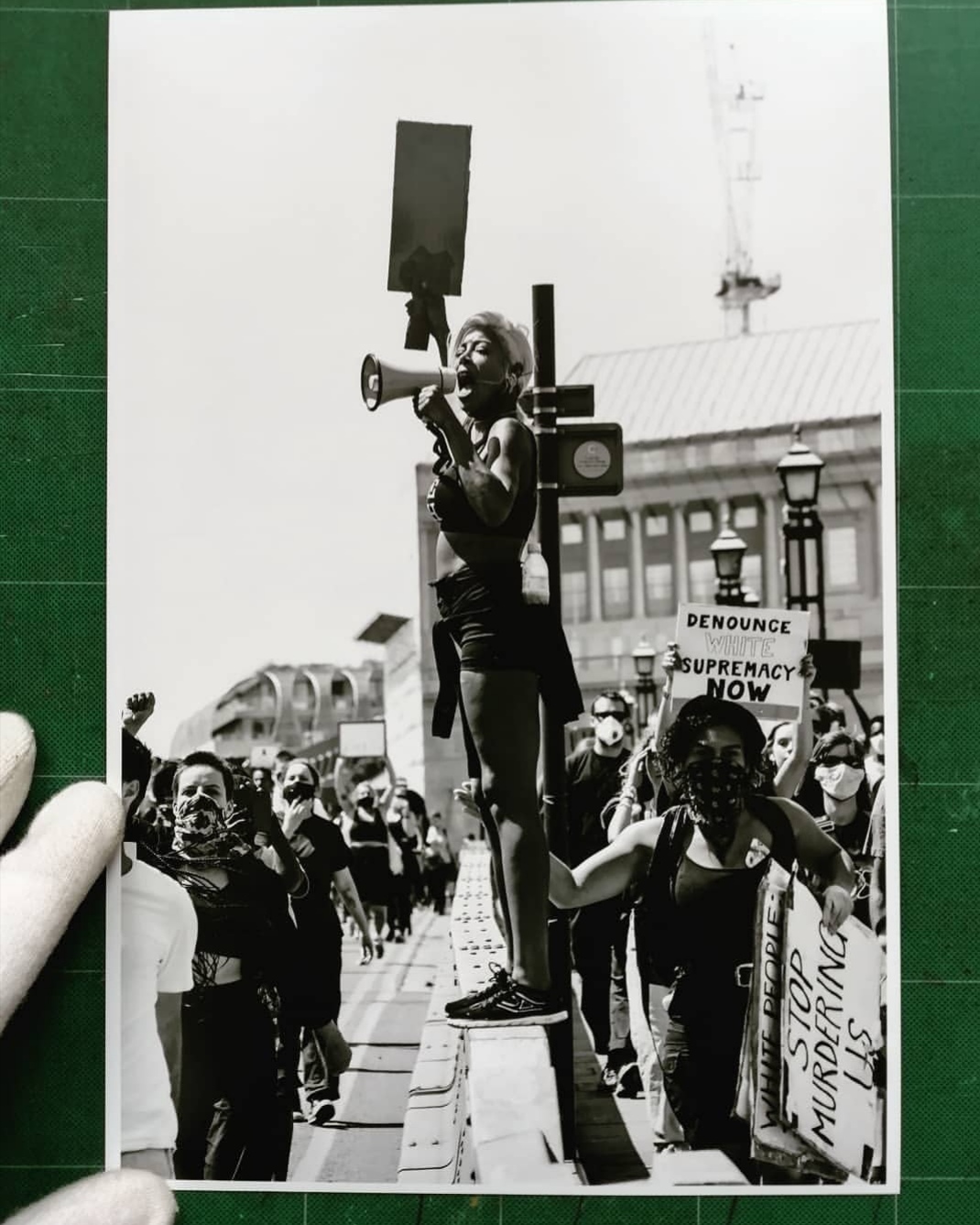 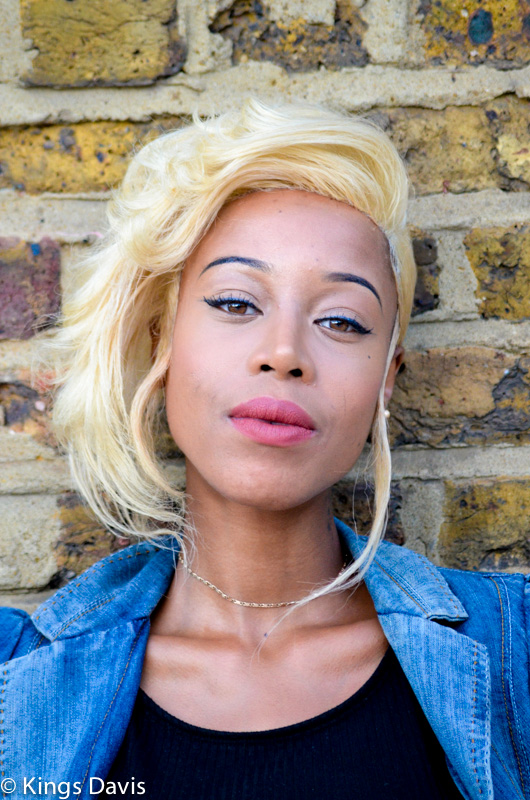 “This was a momentous day- this was the day that everything changed and happened ‪on the 31 st May.‬ This was the day I was genuinely flung into the whole world of protesting! It was interesting as I was going to get toothpaste, it was very much accidental – finding myself at the forefront of this whole movement.

The first protest was in Peckham where I met a group of people who told me about another protest that was happening ‪on the 31st May.‬ I got there (Trafalgar square) and thought that it lacked energy and that there was a lull in enthusiasm. I am from a Jamaican & Nigerian background so I am use to energy and enthusiasm when we are altogether, I expected no different at the protest As I arrived, I looked around and there didn’t seem to be any pockets of leaders anywhere. So I stood on the pillar to get a better look, as we all chanted. I soon realized there was no pocket in the crowd were the leaders stood and as I looked out at the crowd, the crowd looked straight back at me.
I was then approached by a mysterious lady who tapped me on the ankle and handed me a megaphone, then she walked away.

To this day I don’t know who this woman was – she mentioned her organization but I did not hear it properly. When she handed it to me I had to make a snap decision as to whether I would use it or not. So I decided to use it! That was one of the most surreal moments, as this mysterious woman didn’t know that this would ultimately change my life.

Everything happens for a reason. I did not see one leader hence why I ended up leading the protest. Shortly after my speech, another young lady who I had met at Peckham, spoke with anger and talked about burning down everything.This caused mixed opinions/body language – don’t forget there are thousands of people listening. As soon as she said that, I offered my opinion. Something along the lines of, “I am not an ignorant black woman, if I was to be raped, mugged or hurt, the first people I would call would be the police! We are not here to condemn ALL police, just those that are racially prejudice and abuse us and oppress us! We are not here to say F*** ALL Police and cause chaos and anarchy. We ARE here to say F*** the Police who are racist!

After that speech, this girl and I then lead the protest.
If there were any leaders, they did not surface and approach me during the whole three months of protesting.

The picture – It was a beautiful day, I can’t put into words what it meant to me. How it felt, the energy, passion,empathy and determination – we were determined to conquer this problem. This is what resonated the most, to see so many like minded people come together. We are mad, we are sad, we are tired so lets march! let’s scream, lets shout, express our pain, galvanize and seek equality and justice for black people.

I had to stop myself from getting emotional – this march started and ended with every ethnicity. That’s the thing I really take away from this.

That day was crazy. It started with the girl who was leading the march with me. I decided to be un-apologetically me, (black, loud and proud) which gave other people the confidence and license to do so also.

It started with me walking from section to section of the crowd to motivate people and help with keeping the energy alive. (after all I had a megaphone)
This beautiful picture…I remember getting to the bridge and I remember thinking..right – this is our moment to galvanize and show the world what it is we are truly here for! So lets be loud and lets be proud. So I stood on the bridge barrier to do exactly that!

The chant was probably the ‘Black Lives Matter’ chant. Every single person felt the energy – It did something for them and it did something for me! -for you to get a picture of this, is amazing as it captures everything in that moment. I love it. The picture shows all the different placards (‘denounce white supremacy now’ and ‘stop murdering us’) as well as the face masks (marking 2020 as the year of the pandemic). Racism is a pandemic and has killed more than COVID!!

I’m so glad you caught this moment as no one else has given me this picture.”

What a day!! What a spiritual day!! 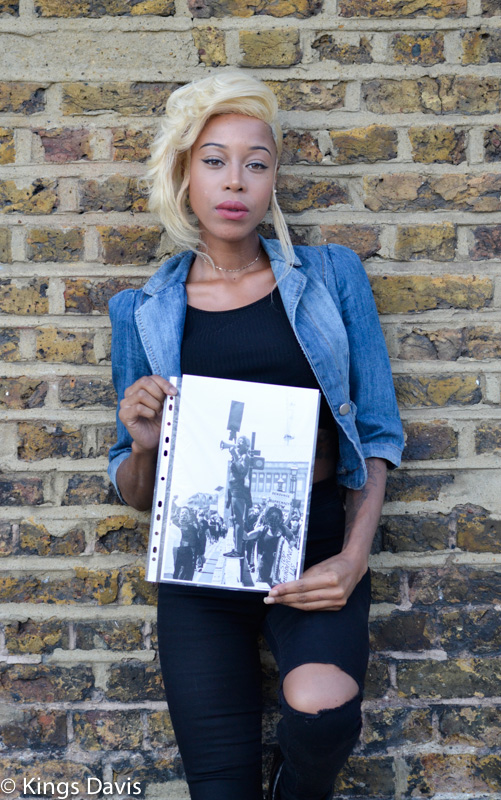